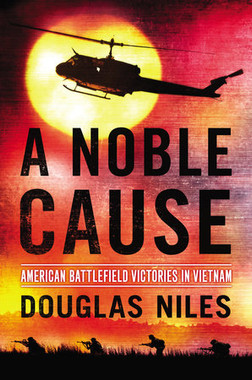 A Noble Cause by Douglas Niles

In the tradition of We Were Soldiers Once…and Young, A Noble Cause is a stirring tribute to the valor and courage of the allied forces in the Vietnam War and a vivid re-creation of hard-won battles from Ia Drang Valley to Khe Sanh and Hamburger Hill…

Celebrating the skill and bravery of the United States armed forces and their South Vietnamese allies,A Noble Cause presents a gripping chronicle of both large and small unit successful combat engagements, including the Battle of Dong Xoai (1965); the Battle of Ia Drang Valley (1965), the first major ground battle of the Vietnam War; the Battle of Loc Ninh (1967) by the Cambodian border; the Battle of Khe Sanh (1967–1968) leading up to the Tet Offensive; the Battle of Dong Ha (1968); the bloody siege on Hamburger Hill (1969);  and the Battle of An Loc (1972), sixty-five miles north of Saigon, which contributed to the failure of the Vietcong’s Eastertide Offensive.

Documenting the invaluable role of a tireless and determined infantry as well as air cavalry divisions and B-52 “Arc Light” air strikes, A Noble Cause chronicles the crucial strategic decisions that led to victory—often against steep odds—and honors the bravery of every soldier who stood his ground, faced the enemy, and gave his all.

Includes photos and and maps