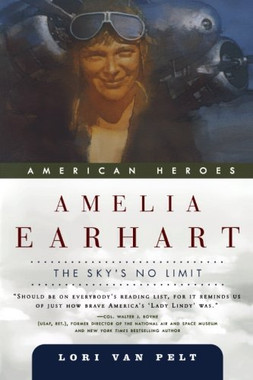 Amelia Earhart The Sky's No Limit by Lori Van Pelt

As a tomboy growing up in Kansas, Amelia Earhart delighted in trying new and risky things, once even building a roller-coaster in her grandparents' backyard. In her 20s she fell in love with flight while watching an aerobatics exhibition and grew even more enthralled when she took her first airplane ride.

At age 24 she earned her pilot's wings and 1928 took part in the transatlantic "Friendship" flight. Her willowy build, wholesome smile, and tousled blonde hair invited comparison to the celebrated pilot Charles Lindbergh, and "Lady Lindy" charmed the public with her unassuming manner.

In 1937, Earhart wed publisher George Putnam, who managed her career and promoted her zealously, ensuring her status as the world's best-known aviatrix. The next year, she soloed the Atlantic, afterward receiving the Distinguished Flying Cross and began championing the efforts of women throughout the world to explore careers -- especially in aviation --
traditionally held by men.Tragically, just days before her fortieth birthday, Earhart, her navigator Fred Noonan, and their plane vanished en route to tiny Howland Island in the Pacific Ocean as they neared the end of their round-the-world journey. President Franklin D. Roosevelt authorized the greatest land and ocean search ever undertaken but no trace of the missing flyers or their craft were ever found.

To Amelia Earhart, even the sky was no limit to those with the courage to test new boundaries.