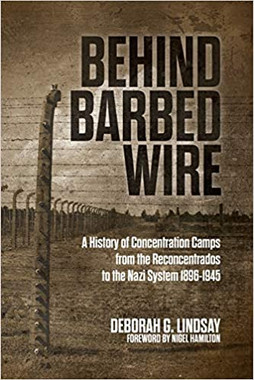 BEHIND BARBED WIRE BY DEBORAH LINDSAY

Most people associate concentration camps with Nazi Germany. Behind Barbed Wire examines how these notorious World War II camps actually reflected a previous use of the system, a system that began almost a century earlier. In truth, Adolf Hitler had studied the American Indian Reservations as he plotted his regime's attack on European Jews and other minorities. Remarkably, in the years between the reservations and the Nazi camps, the United States, along with several other Western powers, implemented concentration camps throughout the globe, each instance employing more and more barbaric measures with harsher and harsher outcomes. Behind Barbed Wire explains how these nations dubiously justified camp operations by citing military counterinsurgency tactics, containment policies, and simply the ability to prosecute war more easily.

This brief history addresses the subliminal reasons for relocating hundreds of thousands of civilians, why the system became so prevalent, and how concentration camps existed under the cover of armed conflict. It argues that, most often, camps can be facilitated only under the guise of war. Anyone with an interest in military history, World War II, concentration camps, and the plight of the Jews will discover how all these topics converge into a compelling story of war, bigotry, and military might.

Behind Barbed Wire also sheds light on the concentration camp systems that have been employed since the fall of the Nazi dictatorship. With current geopolitical issues focusing on elitism, xenophobia, deplorables, terrorism, and military necessity, this book offers some understanding about the unintended consequences of policy.