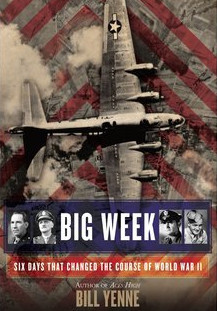 In just six days, the United States Strategic Air Forces changed the course of military offense in World War II. During those six days, they launched the largest bombing campaign of the war, dropping roughly 10,000 tons of bombs in a rain of destruction that would take the skies back from the Nazis…

The Allies knew that if they were to invade Hitler’s Fortress Europe, they would have to wrest air superiority from the mighty Luftwaffe.

The plan of the Unites States Strategic Air Forces was risky. During the week of February 20th, 1944—and joined by the RAF Bomber Command—the USAAF Eighth and Fifteenth Air Force bombers took on this vital and extremely risky mission. They ran the gauntlet of the most heavily defended air space in the world to deal a death blow to Germany’s aircraft industry, and made them pay with the planes already in the air. In the coming months, this Big Week would prove a deciding factor in the war.

Both sides were dealt losses, and whereas the Allies could recover, damage to the Luftwaffe was irreparable. Thus Big Week became one of the most important episodes of World War II, and coincidentally, one of the most overlooked—until now.