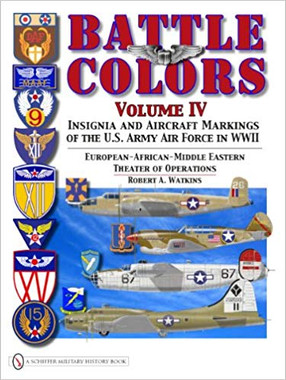 Volume IV of the Battle Colors© series concludes the examination of USAAF combat insignia and aircraft tactical markings in the European Theater during WWII. Covered within this work are the Ninth, Twelfth, and Fifteenth AAFs from the first to last combat operations by U.S. air power in the Mediterranean Theater of Operations. These operations were extensive and covered territory extending from the sands of North Africa to the heartland of Germany, and from the shores of French Morocco to the oil fields of Romania. Combat units covered include both Day and Night fighters, Bombers, Troop Transports, and Reconnaissance and Special Operations groups/squadrons.
All combat units assigned or attached to either of the three AAFs are covered within this work, utilizing over 1,123 full color illustrations and wartime photos. These depict every currently known AAF group/squadron insignia belonging to the Air Forces being examined. Included are both official and unofficial combat insignia, in addition to many designs that were superseded by later images. Wartime photos showing common applications of these unit insignia are interspersed throughout the text.
Aircraft tactical markings are depicted via original full color illustrations, showing full and close-up profiles in addition to upper elevation views when appropriate.
All known Theater airfield assignment locations and dates are detailed with color area maps included within each respective units section, and are all fully indexed for ease of reference in the back of the book. Reader-friendly "Group Markings" and "Group/Squadron Code" visual indexes are also included to assist research into specific AAF units.
Additional topics addressed include the evolution of U.S. AAC/AAF national markings, combat mission markings, and basis airframe nomenclature.
Those familiar with Volume III of this series (which deals exclusively with the Ninth USAAF) may wonder initially whether the inclusion of the Ninth in this current work is a rehash of material covered in Volume III. It is not! Volume IV deals with the same subject matter, but at an earlier period of the Ninth AAFs deployment in the MTO, prior to redeployment of this unit to the UK, from which point Volume III picks up.
Next in the Battle Colors© series (Volume V) will shift focus to the Pacific Theater of Operations. This work will examine the insignia and tactical markings of the Fifth, Tenth, Eleventh, and Thirteenth USAAFs.