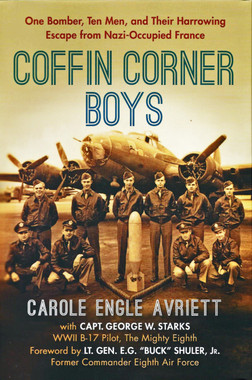 A story of adventure, survival, loyalty, and brotherhood...

Taking off from England on March 16, 1944, young Lt. George Starks and the nine-man crew of his Flying Fortress were assigned to the "coffin corner," the most exposed position in the bomber formation headed for Germany. They never got there. Shot down over Nazi-occupied France, the airmen bailed out one by one, scattered across the countryside. Miraculously, all ten survived, but as they discarded their parachutes in the farmland of Champagne, their wartime odyssey was only beginning.

Alone, with a broken foot and a 20mm shell fragment in his thigh, twenty-year-old Starks set out on an incredible 300-mile trek to Switzerland, making his way with the help of ordinary men and women who often put themselves in great danger on his behalf. Six weeks later, on the verge of giving up, Starks found himself in the hands of a heroic member of the French Resistance—he calls him "the bravest man I've ever known"—who got him safely across the heavily guarded border.

Similar ordeals awaited the other nine crewmen, who faced injury, betrayal, captivity, hunger, and depression. It was nothing short of miraculous that all ten came home at the end of the war.

George Starks emerged from his ordeal with two passions—to stay in touch with his crew whatever the obstacles and to return to France to find and thank the brave souls to whom he owed his life. His enduring loyalty enabled him to do both.

"The story of George Starks is one that brings to life the fighting spirit, heroism, and patriotism shown by the U.S. Army Air Corps in WWII. This book is inspirational and a must-read for anyone interested in WWII history in general and the Mighty Eighth Air Force in particular."
—HENRY SKIPPER, President and CEO of the National Museum of the Mighty Eighth Air Force

"Rarely do we read true stories about the fearsome, persevering, enduring, unselfish love of country displayed by Dr. George Starks. He doesn't like to be called a hero, but no other word can rightly portray him better. He is my hero and after reading this book, he will be yours too."
—BRENDA ELMGREN, former chief administrative of cer of the National Museum of the Mighty Eighth Air Force

"...readers will catch a glimpse into rst-hand accounts of what very young men did in serving our country at a time when the world was at war—and how brave people abroad responded to their mission. You will be inspired and engrossed at every turn of the page of this remarkable book."
—BILL FREDERICK, former Mayor of Orlando