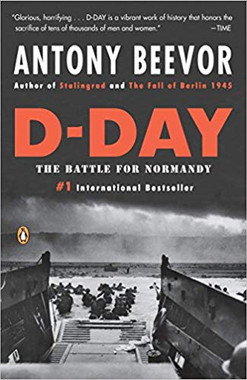 D-Day: The Battle For Normandy by Antony Beevor

"Glorious, horrifying... D-Day is a vibrant work of history that honors the sacrifice of tens of thousands of men and women."—Time

Renowned historian Antony Beevor, author of Stalingrad and The Battle of Arnhem, and the man who "single-handedly transformed the reputation of military history" (The Guardian) presents the first major account in more than twenty years of the Normandy invasion and the liberation of Paris. This is the first book to describe not only the experiences of the American, British, Canadian, and German soldiers, but also the terrible suffering of the French caught up in the fighting. Beevor draws upon his research in more than thirty archives in six countries, going back to original accounts and interviews conducted by combat historians just after the action. D-Day is the consummate account of the invasion and the ferocious offensive that led to Paris's liberation.