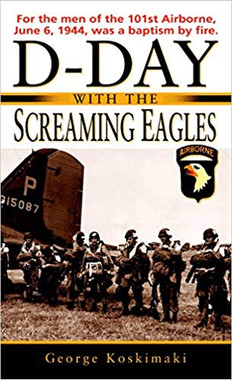 D-Day with the Screaming Eagles by George Koskimaki

In the predawn darkness of D-Day, an elite fighting force struck the first blows against Hitler’s Fortress Europe. Braving a hail of enemy gunfire and mortars, bold invaders from the sky descended into the hedgerow country and swarmed the meadows of Normandy. Some would live, some would die, but all would fight with the guts and determination that made them the most famous U.S. Army division in World War II: the 101st Airborne “Screaming Eagles.”