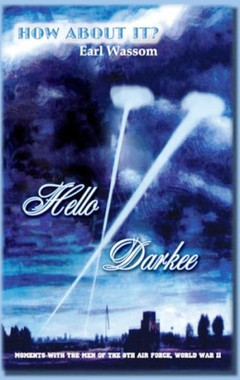 This volume is a compilation of seventy inspirational messages that address major and minor aspects of the 8th Air Force’s air war against Nazi Germany. During the 1942 – 1945 periods, young Americans numbering more than 350,000 were part of an air armada that repeatedly launched 2,000 four engine bombers and 1,000 fighters on a single combat mission from their bases in East Anglia, England. The price paid in human lives was tragic with 47,000 casualties, 24,000 of which were death. The remaining were taken out of combat by spending the rest of their military usefulness as Prisoners of War. The episodes in HELLO DARKEE are about the lives of the men who lived, served and survived those turbulent years and went on to live useful, productive and fruitful lives. But the memories of those war-years lingered. The lives of these Veterans serve as an example to their peers and their descendents. The stories in this volume were written to offer encouragement, understanding, and hope for the Veterans and every reader. They also serve to remind the next generations of the era in which Grandpa lived and the experiences he encountered during his lifetime. Usually, he did not talk much about it but his children and grandchildren have begun to ask questions to learn about his war when he was young.