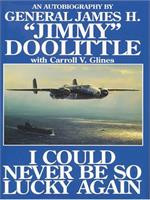 I Could Never Be So Lucky Again: An Autobiography of James H. "Jimmy" Doolittle with Carroll V. Gines

Pilot, scholar, daredevil, general . . . James ""Jimmy"" Doolittle was one of America's greatest heroes. In a life filled with adventure and achievement, Doolittle did it all. As a stunt pilot, he thrilled the world with his aerial acrobatics. As a scientist, he pioneered the development of modern aviation technology. During World War II, he served his country as a fearless and innovative air warrior, organizing and leading the devastating raid against Japan. Now, for the first time, here is his life story - modest, revealing, and candid as only Doolittle himself can tell it. Doolittle tells a story of the successes and adventures, the triumphs and tragedies of a true American hero - a far-seeing leader whose courage, devotion, and daring changed the course of modern history . . . and continues to make its influence felt to this day.