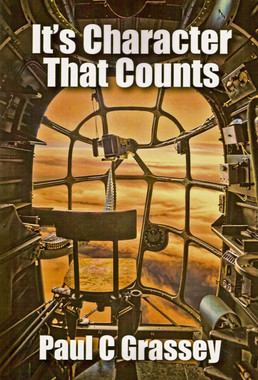 It's Character That Counts by Paul Grassey

The experiences of the men who formed the American Eighth Air Force during World War II are rich material for students of character. The flight crews of the Eighth had the highest casualty rates of all American forces in the war. Paul Grassey, a former bomber pilot, immerses you into that world. He uses his own exploits and those of his high school friends to exemplify the behaviors essential to success in life. You will feel the spirit, the humor and the emotions of the ordinary young men caught up in the process of anticipating, preparing for and conducting war. The stories are not on a grand scale, but at the personal level. You become a witness to extraordinary accomplishments done without fanfare in unquestioning service to our country. While the material is of interest to students of the period, its larger impact stems from the lessons it provides for character development