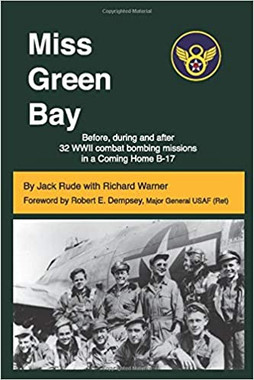 Miss Green Bay: Before, during and after 32 WWII combat bombing missions in a Coming Home B-17: By Jack Rude with Richard Warner

As an 8th Army Air Force Boeing B-17 Flying Fortress tail gunner in World War II, Jack Rude, from December 24, 1944 through April 19, 1945, flew 32 combat bombing missions over Germany. Flying most of his missions in a "Coming Home" B-17 named Miss Green Bay, Mr. Rude with 8 other crew members flew from Debach, England in one hundred-mile long, 1,000- to 2,000-aircraft bomber streams against thousands of enemy fighters and acrid man- and plane-destroying flak in an effort to destroy Hitler’s ability to make war. In this book, Mr. Rude describes his youth in Herrin, Illinois, his early personal military training, the creation of the Harris crew, the Harris crew's training in the four-engine Consolidated B-24 Liberator heavy bomber (including a crash landing in the Central Oregon Gunnery Range), the Harris crew’s conversion at the cusp of battle to the four-engine Boeing B-17 Flying Fortress heavy bomber, and the Harris crew's 32 combat bombing missions over Germany (including a shoot-down and crash landing in Belgium). Following World War II, Mr. Rude remained in the U.S. Air Force serving in Germany with the U.S. Army of Occupation, in Greece under the American Mission for Aid to Greece (AMAG) program, at Rhein-Main AFB, Germany during the Berlin Airlift, and in the U.S., Libya, and England during the Cold War and Korean War (Police Action). If you plan to read one or many books about World War II, this one should be on your list—one young man from small-town America--multiple earthshaking moments in world history.