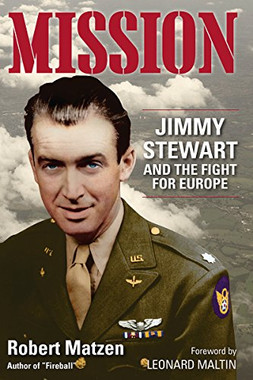 Mission: Jimmy Stewart and the Fight for Europe by Robert Matzen

Presenting an in-depth look at the life of America's boy next door, Jimmy Stewart, this book spans from his time served in the United States Army Air Corps to his return to Hollywood as a changed man who embarked on the production of America's most beloved holiday classic, It's a Wonderful Life. During his military career, he rose from private to colonel and participated in 20 World War II combat missions over Germany and France. When the war was over, he returned home with millions of other veterans to face an uncertain future, suffering from what is now known as PTSD. For the next half century, Stewart refused to discuss his combat experiences and took the story of his service to the grave. This book brings to life a Jimmy Stewart that readers never knew until now, a story more fantastic than any he had brought to the screen.