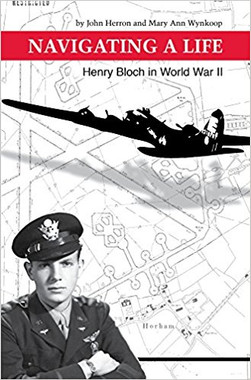 Navigating a Life: Henry Bloch in World War II by John Herron and Mary Ann Wynkoop explores how Henry Bloch's wartime experiences molded his character decisively, preparing him to later launch H&R Block, one of the postwar era's major entrepreneurial success stories. As a bomber navigator who defied the odds by surviving dangerous missions over some of Germany's most heavily guarded targets, Bloch learned how to face down fear. In his training before and after combat, especially at the Harvard Business School's Statistical Control Program for military personnel, Bloch further learned how to apply the newest scientific breakthroughs in decision making. Navigating a Life recounts Bloch's service in the U.S. Army Air Force's Ninety-fifth Bomb Group, but readers also glimpse Bloch's life in Kansas City and Michigan before he was called to duty and after the war. Illustrated with personal and historical images, this book shows the challenges that fliers like Bloch faced and why so many lost their lives. Navigating a Life shows how one man finds resilience amid overwhelming challenges. Henry Bloch is the co-founder and chairman emeritus of H&R Block.