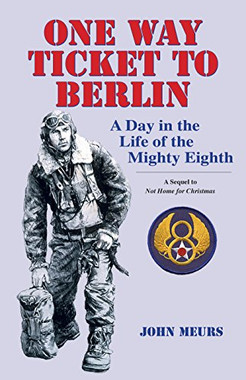 One Way Ticket to Berlin by John Meurs

On an early morning in October 1944, two Allied airmen and six members of the Dutch underground were executed in a village in Nazi-occupied Holland. Later that morning their bodies were dropped on various street corners in the village with a note Terrorist on their chests.

The airmen had been captured in the house of the boy who would later become the brother-in-law of John Meurs, the author of this book. The boy could escape but his mother was sent to Ravensbrück concentration camp in Germany where she died a few months before the liberation of the camp by Allied troops.


One of the airmen captured and killed belonged to the British RAF. The other was Bob Zercher, the ball-turret gunner of a B-17 of the 8th USAAF. He had arrived on Dutch soil on April 29, 1944 when his bomber crash-landed in the Eastern part of Holland. The whole crew was taken under the wings of the Dutch underground and survived the war with the exception of Bob Zercher who was initially buried in the cemetery of Apeldoorn, Netherlands.


Meurs decided to research all crews of the Mighty Eighth who were reported missing in action on that particular Saturday in 1944. He collected the personal story of veterans who lived through it, families of veterans lost, and witnesses of the crashes. These first-hand recollections provide a compelling and terrifying account of the realities of war.


Thanks to the noble men of the Mighty Eighth who had a one way ticket to Berlin in 1944 and their comrades in arms, many people the world over now live in peace and freedom.