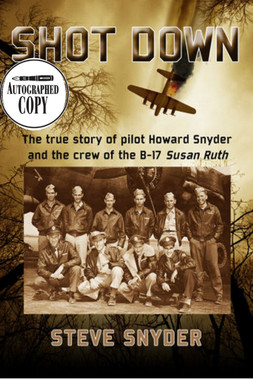 Shot Down by Steve Snyder

This is no ordinary memoir of a World War II father. The literature of the Second World War is filled with volumes written by sons and daughters, nieces and nephews who step into the shoes of the historian, hoping to preserve a small piece of their family’s history. Only a few are successful. With Shot Down and the story of the Flying Fortress Susan Ruth, Steve Snyder has reached a level of scholarship few amateur historians achieve. Snyder’s story of his father and the Susan Ruth crew provides valuable details about many aspects of the war: the American home front, separation for young families, training, combat operations, bailing out behind enemy lines, the underground, German atrocities, and behind-the-scenes stories of Belgium civilians who risked all to save American flyers. This is a story that all young Americans should read so that they can learn about the price of victory over the tyranny that was Hitler’s Europe. As each generation comes and goes, World War II fades further into the annals of history. Shot Down keeps the story of real people alive for generations of Americans, many who are not yet born. If we can learn from the lessons in the Susan Ruth story, we can apply those experiences to our own future, and our nation will be the better for it.

Shot Down is a compelling story of our B-17 aircrews that flew, fought, and died over Europe to save a continent from tyranny and oppression. There were over 56,000 downed airmen in World War II. Many died, many were captured, and some were fortunate enough to escape and evade capture, making it back to friendly lines to fight again. Lt Howard Snyder and the crew of the Susan Ruth was one of those crews that went down over Europe. Their firsthand account of their experiences, including the bravery of the members of the Underground who helped them, is a wonderful read … and gives a great sense of the heroes that made up the "Greatest Generation."

As a young girl, I remember my dad saying that he was going to build a memorial in memory of the B17 “Susan Ruth” crew members, courageous men who wanted to stop a lawless monster. Since 1989, we organize an annual ceremony honoring the memory of those who crashed in Belgium on February 8, 1944. The local population still remembers these Heroes who crossed the Ocean to come and help people who were totally unknown to them; free them and restore their honor and happiness. They gave their lives and we will be eternally grateful to them for their sacrifice. We will always remember these men as Heroes of our Freedom. Thank you, Sirs. We will never forget you.

As the 424th Air Base Squadron Commander that represents the U.S. at the “Susan Ruth” memorial every year, I learned about what happened to these crew members. This story is a great example of young men from the greatest generation fighting to defend the cause their country asked them to.