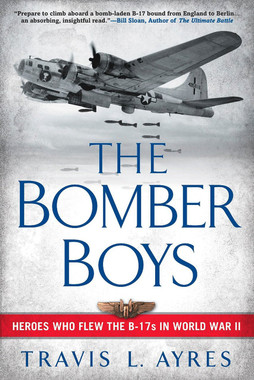 True tales of heroism and the men who fought and died in the skies of World War II Europe.

In World War II, there were all too many ways for a fighting man to die. But no theater of operations offered more fatal choices than the skies above Nazi-occupied Europe. Inside of a B-17 Bomber, thousands of feet above the earth, death was always a moment away. From the hellish storms of enemy flak and relentless strafing of Luftwaffe fighters, to mid-air collisions, mechanical failure, and simple bad luck, it’s a wonder any man would volunteer for such dangerous duty. But some very brave men did.

Some paid the ultimate price. Some made it home. But in the end, all would achieve victory.

Here, author Travis L. Ayres has gathered a collection of previously untold personal accounts of combat and camaraderie aboard the B-17 Bombers that flew countless sorties against the enemy, as related by the men who lived and fought in the air—and survived. They are stories of heroism, sacrifice, miraculous survival and merciless warfare. But they should all be remembered...