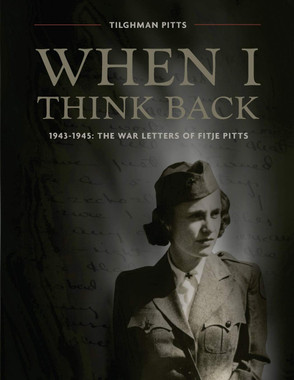 When I Look Back is a collection of letters written from Europe during World War II by Red Cross volunteer Fitje Pitts. Fitje, a 1939 graduate of Smith College, served on USAAF bomber bases in England, France and Belgium from July 1943 until November 1945. She sailed to war on the Queen Mary in June 1943; Kathleen Kennedy was one of her cabin mates. Fitje packed a lot into her twenty-nine months in Europe. Her first flight was in a B-17 Bomber, she was in London when V-2 Rockets fell, and along the way, accumulated at least three lovers. Before sailing to England the only times she had been out of the United States were during Prohibition when her father took the family from their summer cottage in Maine across the border into Canada to buy liquor. Before returning to the United States she traveled to England, Scotland, Ireland, France, Belgium, The Netherlands, Luxembourg, Czechoslovakia, Germany and Switzerland. She rested on the Riviera, flew into war-ravaged Berlin, and smelled the “peculiar sweet smell of death.” The letters are a historical treasure trove. They are about life on bomber bases during World War II, the pilots, flight and ground crews. They are a unique look at war as told through the pen of a young woman and Red Cross volunteer. The letters are funny and they are sad. They are about friends and lovers. They are about danger, but never about fear.