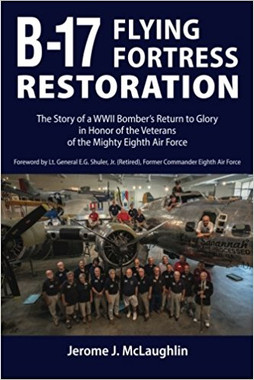 Through engaging narrative and first-person accounts, B-17 Flying Fortress Restoration captures the painstaking restoration of a World War II-vintage Boeing B-17 bomber by more than 100 volunteers in Pooler, GA.

Airplane restoration and military aviation enthusiasts alike can follow the airplane’s journey from the storage hangers of the Smithsonian’s National Air and Space Museum to the Combat Gallery of the Museum of the Mighty Eighth Air Force where it arrived in pieces on the backs of four tractor-trailers.

With more than 200 photos, B-17 Flying Fortress Restoration charts the volunteer team’s frustrations and successes over a six-year period as they cleaned accumulated crud from the bomber’s surfaces and carefully recreated its aluminum skin, operating systems, armament and even its nose art. In addition, the book traces the histories of the two City of Savannah B-17's – the original and the restored - and includes many personal stories of veterans as told by themselves or their families.

The City of Savannah volunteers brought a wide range of skills to the task—they were airframe and power plant mechanics, painters, aeronautical engineers, electrical engineers, business people and administrators, even a former physics professor with a Ph.D. and 30 years of flying experience. Many were drawn to the project after their day jobs at Gulfstream Aerospace Corporation, LMI Aerospace, Inc., and the 165th Airlift Wing of the Georgia Air National Guard. Others were retired and eager to make a long-term commitment to restoring a vintage warbird.

While all of the volunteers were infused with a passion for aviation, for some, restoring the airplane was a deeply personal cause. The father of one volunteer was interned in Switzerland after his B-17 crashed while returning from a mission to Berlin. He escaped his internment by skiing down a mountain in the dead of night, evading enemy forces, and joining up with Gen. George Patton’s advancing army. The family of a second volunteer suffered the loss of three sons, one in the tail turret of a B-17, and the imprisonment of three more in German and Japanese POW camps. The father of yet another volunteer flew 58 missions as a bombardier.

The Eighth Air Force lost more airmen in World War II than the entire U.S. Marine Corps. Some 26,000 were killed, 47,000 wounded, and another 28,000 became POW's during the war. The restored airplane and the book also pay homage to the original City of Savannah B-17 bomber and the residents of Savannah who raised funds to build the airplane and train its flight crew. The original City of Savannah B-17 was the 5,000th aircraft to be processed through Hunter Army Airfield during World War II.

The restored City of Savannah B-17 was built in May of 1945, too late to play an effective role in the war so it spent 30 years engaged in peaceful pursuits. It mapped the Canadian Arctic. It helped draw the Distant Early Warning Line. It served as a slurry bomber fighting forest fires. In 1984, it was acquired by the Smithsonian National Air and Space Museum, which tucked it away alongside the retired space shuttle Enterprise in a storage hangar in Chantilly, Va. And there it spent the next 25 years.

Today, the restored and renamed City of Savannah B-17 occupies a place of honor at the National Museum of the Mighty Eighth Air Force as a lasting tribute to veterans of the Eighth Air Force who served in World War II.