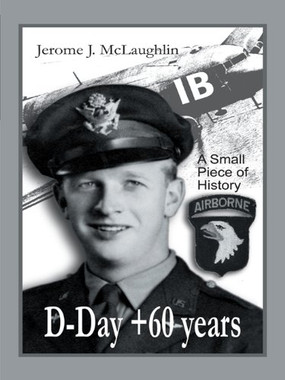 D-Day +60 Years: A Small Piece of History by Jerome McClaughlin

This unique account of D-Day history provides an unusual look into the US Armys preparation of a new type
of World War II warfare, that of airborne operations. The book describes, using personal interviews with the veterans involved, how young men who had never
even flown in an airplane before the war were trained to fly into combat, or to parachute into the dark of night.

Regiment. Most, including the authors uncle, did not survive to see the dawn on D-Day morning.style='mso-spacerun:yes'> The story then moves forward more than half a

century, when research to find out what happened to his uncle led the author to meet some of the survivors of that night, resulting in what is believed to be
the first reunion of a D-Day pilot with the men he dropped on that fateful morning, 56 years earlier. Many children of the next generation are making efforts to find out what happened to their
fathers and uncles in World War II. This story is a classic example of the joy and heartbreak that can result from the success of such a search.