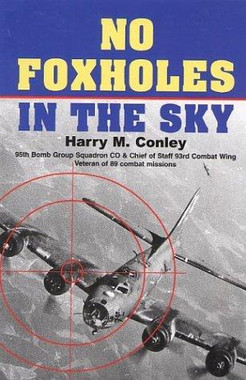 No Foxholes in the Sky by Harry M. Conley

Colonel Harry Conley, USAAF, tells the story of the 95th Bomb Group in training in the U.S. in 1942 and eventual transfer to England and the Eighth Air Force to pursue the air war against the Luftwaffe and German ack-ack gunners of WW II. There is dramatic coverage of many of the deadly air battles, including Kiel, Regensburg, Munster and Berlin, to name a few. Author Conley has incorporated excerpts from letters he wrote to his mother, with present-day remembrances of combat missions and other events of the entire period of the war.
Along the way, Harry worked with, counseled, and led countless USAAF flight crew personnel, and ground crew personnel who serviced the B-17s and worked in many different jobs to Keep 'Em Flying. And Harry describes in a most interesting manner interactions he had with VIPs Winston Churchill, Lord Beaverbrook, Gen. Charles de Gaulle, Gen. Hap Arnold, Gen. Jimmy Doolittle, Gen. Curtis LeMay, Gen. George Patton and Samuel Guinness.
In the Introduction, Grif Mumford, an original member of the 95th Bomb Group, states, "This book provides a grass roots understanding of what it took to achieve and maintain the high level of operational effectiveness that the Eighth Air Force demonstrated through its successful destruction of the German Luftwaffe, giving the Allies absolute air supremacy over all of Europe and paving the way to an Allied victory."
In early 1945, Harry joined Curtis LeMay and served in the Pentagon where he became involved in the training of the 509th Composite Bomb Group that dropped the two atomic bombs on Japan, ending WW II.